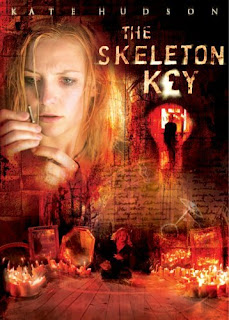 Kate Hudson makes a rare deviation into non-romcom territory; wandering around a big house in New Orleans, caring for a completely paralysed John Hurt. An utterly unscary but blatantly evil old lady, meanwhile, chops up chickens and casts not-Voodoo spells in a vain attempt to stop Hudson’s a-meddlin’. A lawyer character also turns out to be evil, in a silly ‘betrayal’ that everyone saw coming anyway.

If you really want to watch a horror movie set in New Orleans, then go watch Hatchet instead. Otherwise, don’t watch Skeleton Key. A horror movie for people who don’t like horror movies, Skeleton Key is an unmemorable little flick, the only redeeming point being a shot of Kate Hudson in her undies. Which, to be fair, you could have gotten off the Internet for free.

Now, Skeleton Key isn’t really that bad, but it wasn’t good enough for me to be nice about it either. The great John Hurt’s presence is inexplicable, since he gets to say about two words in the whole movie. He spends the rest of the running time alternating between (a) looking Haunted in a wheelchair (b) having his hair cut in a wheelchair. There’s about one scene where he gets to act, but that’s mostly ruined by being offset with shots of Kate Hudson trying to do not-Voodoo (that is, throwing potpourri around and reading from what sounds like a homeopathic handbook).

In the final quarter, the movie gives up all pretence of its ghost story, and just has Hudson running around, trying to fight off an unscary fat old lady and an unscary lawyer. To add to his indignity, John Hurt spends the finale lying in a shed, buried under a blanket.

In the hands of a better director, this probably could have been a decent movie. Not enough movies are set in New Orleans, and Skeleton Key pretty much wastes the opportunity. Likewise, Kate Hudson is a fair actress, and probably has the chops to pull off a better horror than this. With a better director, this could have turned out to be a precursor to Drag Me to Hell. And yet here, it’s even worse than even The Unborn.

And so plays out Skeleton Key; a movie which, despite being set in New Orleans, only features about two black characters; one of whom is Hudson’s best friend, and therefore doesn’t actually live in New Orleans. Skeleton Key is so irredeemably stupid that it stars John Hurt and doesn’t even bother to let him act.