Since when did Two-Face wear a stetson? JONAH HEX 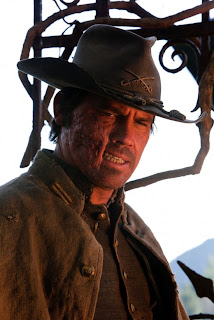 Director: Jimmy Hayward (2010)
Starring: Josh Brolin, John Malkovich, Megan Fox, Michael Fassbender
Find it online: IMDB
Strike another one for DC. Batman related cinema and animated features aside, ol' Stan Lee and his buddies at Marvel have been knocking the ball outta the park with their movie releases. To be fair, DC haven't really been trying so far. Jonah Hex is their first real character piece since The Dark Knight. Hopefully this will all change soon; there's a Flash, a Green Lantern, a Nolan-supervised Superman and another Batman on the way. I'll believe a Justice League when I see one, but so far we'll have to make do with BatBale and, um, Jonah Hex.

Brolin plays the half-faced cowboy, disfigured by a villainous John Malkovich (to be fair, when is he not being villainous?) and lookin' for revenge. Brolin is passable enough, although he's not given nearly enough to work with. Sure was kind of the fella to take that bullet for Thomas Jane. If the horrible script wasn't bad enough, he has to share scenes with Megan Fox and her personal portable quality/charisma/watchability vacuum. She's terrible, in her usual nasal and vacant way. Obviously she's the worst actor in the movie, closely followed by John Malkovich. Even phoning it in, he's better than Megan Fox. Saying that, I think I saw a cactus that's better than Megan Fox.

I'm not as down with the Jonah Hex mythos as I am with other characters, but I know it can't be as bad as this movie. An R rating wouldn't have gone amiss (think Punisher: War Zone) or howzabout making the thing actually look like a Western? My ideal Jonah Hex would've been a cross between The Proposition and The Dark Knight. There are some great modern Westerns out there (Brolin's own No Country for Old Men, the aforementioned Proposition and The Three Burials of Melquiades Estrada) but this is more like an unintentionally funny version of Wild Wild West, Shanghai Noon or Daredevil. You'd be better off playing The Proposition or rewatching the Two-Face bar scene in Dark Knight.

As a fan of comic books, Westerns and purposefully cheesy nonsense, I really wanted to like Jonah Hex. (Jonah) heck(s), I even tried to ignore the fact that Megan Fox was in it. But no, even aside from the across-the-board bad acting, Jonah Hex is a dull movie. It has its moments, but nowhere near enough of them. I honestly think that replacing one of the tertiary characters with comedy-sidekick Owen Wilson or Jackie Chan would've improved this movie; or at the very least made it a slightly more tolerable brand of bland.